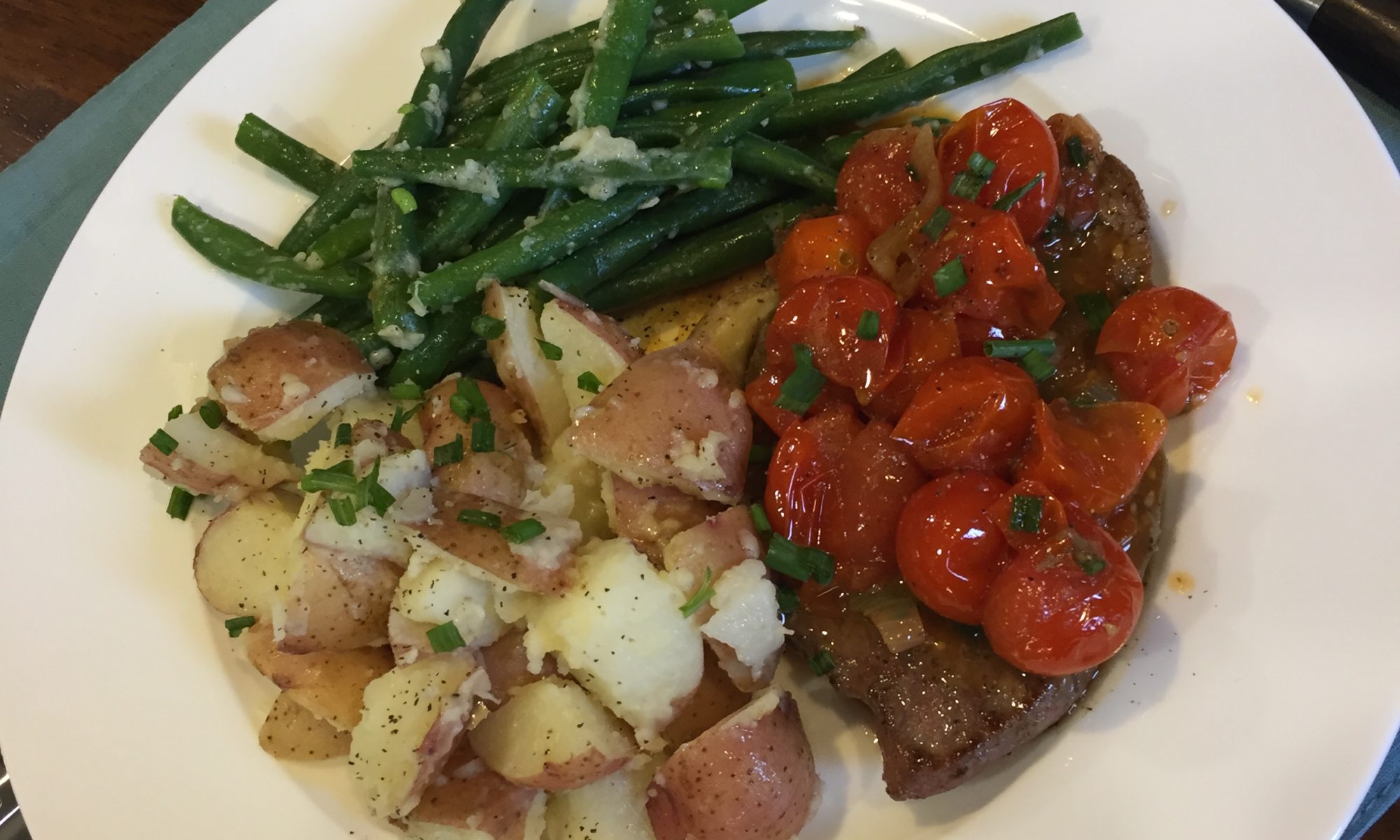 It’s time to start a cooking commentary called, “That’s a terrible idea. Don’t do that.”

Tonight’s Plated meal, Seared Steak with Cherry Tomato Vinaigrette, was a mediocre recipe from the start. I made the mistake of starting to prep before I read the whole recipe through and realized at damn near every step there were serious flaws. I corrected along the way and the meal was FANTASTIC!

The recipe is attached and here are my corrections to make this the amazing dish we just ate:

Step 2: The recipe calls for cooking the shallots and tomatoes then setting the pan aside before moving on to step 3 with a new pan. That’s a TERRIBLE idea! Don’t do that. Dump the vinaigrette into a bowl, mash with a simple masher (pictured) instead of a spoon, maybe 3 or 4 times. Don’t go crazy. This isn’t marinara. KEEP THAT PAN EXACTLY AS IT IS, full of shallot juice, salt and pepper.

Step 3: The recipe says 4-5 minutes per side for these 1/2” thin steaks in a drop of olive oil. That’s a TERRIBLE idea! Don’t do that! We’re making steaks, not leather belts. Let your steaks sit out and come to room temperature first, then coat with salt and pepper. Using the same pan from step 2, add 1-2 tbsp butter and heat until it bubbles. Cook the steaks for no more than 2 min per side, or until they reach 135F and set them on a plate to rest and absorb their own juices. Add 1/2 tbsp butter to each steak as they rest. This will result in a perfect medium rare and juicy steak. These cuts are really thin making them far too easy to overcook.

Keep the pan EXACTLY as the steaks left it. You’re going to use this again against the advice of the recipe.

Step 5: instead of 1 tbsp olive oil, make it 1/2 and add 1/2 tbsp butter to the potatoes and green beans. Also, cook the green beans for at least 4+ minutes more. If they’re too under-cooked they’ll squeak against your teeth and that’s enough to drive a person insane. I’d rather chew on aluminum foil.

Step 6, part 1: the recipe calls for cutting the steaks into slices. That’s a TERRIBLE idea! Don’t do that. There’s only so much moisture in these steaks and it needs to stay inside until you’re ready to eat them. Serve steaks intact.

Don’t you DARE discard the juices that collect on the steaks’ resting plate. That’s liquid gold that is going to be put to good use when you drizzle it over the plated steaks and potatoes.

Step 6, part 2: the recipe says to return the pan you cooked the tomatoes in back to the range. That would have been a TERRIBLE idea! Don’t do that. Instead, you should have a skillet that now contains the juices and remnants of shallots, tomatoes, steaks, rendered fat, butter, olive oil, salt and pepper. That’s more liquid GOLD right there and you’re going to put it to great use by throwing the tomato/shallot mix into the pan and bring it quickly to a simmer. Stir. Get every bit of yum blended in. Add the chives.

Finally, plate as you see here and dig in while it’s still steaming.

I have to note that there is a catastrophic lack of garlic in this recipe. I would have added 1-2 cloves to the shallot/tomatoes and at least one minced clove to the pan while cooking the steaks.

For what it’s worth, Plated doesn’t state what USDA grade of steaks they’re providing. If you repurpose this recipe, which you SHOULD do, pick up a quality cut, even if it’s thin. There’s nothing wrong with a “1 Minute steak” seared in butter. Ever.

We’re full and don’t feel like we need to take a nap.